Legoland Express is a train taking you around a figure of 8 circuit within the park. The theme is safari and on the trip you'll come across tigers and gorillas amongst many other animals - made out of Lego of course! Watch out as some of them might surprise you with a squirt of water or two!

Video of the Legoland Express train ride at Legoland Windsor:

The train itself is quite large, comfortably seating a family of 4 across on each bench. The train takes about 150 passengers each time. The train is made to look like a steam train but it's actually powered by a diesel engine.

Both the train and the waiting area are covered but open at the sides. The view from the train is excellent in places, for example when you go past (or rather over) the Coastguard HQ boating lake. 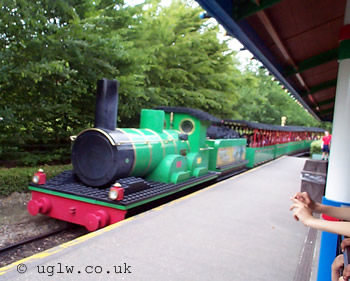 Legoland Express provides an interesting spectacle for pedestrians around the park too - in Lego City, near the station there is a controlled level crossing which is patrolled by the station master - this stops pedestrians on one of the busy pathways. There is also an staff-supervised level crossing near Atlantis Submarine Voyage, you can see this clearly on the video.

In the 2006 season, when the ride started its trip the train used to pull backwards for about 30 metres and then go forwards as normal. This was, according to a Legoland employee, to build up enough "steam" to get past the slight incline and right turn soon after the start. However this is not happening now, so perhaps the engine has been upgraded to cope!

We also notice that the ride is managed differently by some drivers - sometimes, once you have boarded, you get a short introduction by the driver (just a few words), but more often you don't. It seems strange there is not a standard for this.

Queues can be long for this popular ride, but bare in mind the train has a large capacity so the queue will shorten considerably for each collection of new passengers.

Ride time around 3-4 minutes - depending on driver!

This ride was called Orient Expedition until the 2015 season. Then it was called Heartlake City Express for a few years.