Merlin's Challenge is a deceptively fast carousel. It is a roundabout style circular ride which has cars facing the direction of travel with room for 2 people. You are held in with a bar. The ride starts slowly but soon reaches a speed quick enough to push you both to the edge of the car because of the centrifugal force - for that reason the bigger person of the pair sits on the outside. Whilst going round there is a dipping action as the cars bob up and down the undulating track. 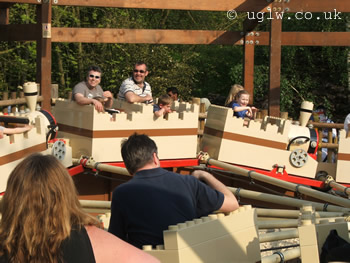 It all makes for an exciting ride - even though it looks like a boring roundabout. You can see how fast it gets in this video:

This ride was known as Dino Dipper and opened in 2005, Legoland's 10th season, in Adventure Land. It was re-themed and renamed to Knights' Quest and moved in 2011 over to Knights Kingdom to make room for the new Atlantis Submarine Voyage ride. Later it was renamed to Merlin's Challenge.