An attraction for all the family. The ride is based around a self-propelled fire engine and putting out a pretend fire. Here, the child is the hero by extinguishing the fire!

A covered queue area has some Lego models to look at as you wait. Once you are at the front of the queue you are grouped in 4's and await a free fire engine. Four fire engines race at one time. There are 2 sets of 4 engines although the second set seems to run only at peak times. 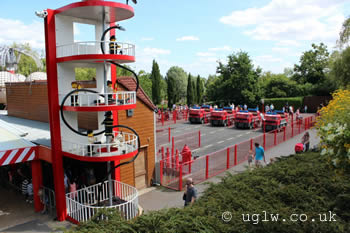 You are given some instructions by the Legoland attendant and then the ride starts. The fire engine is propelled by moving an arm up and down in a pumping motion - the adults do this. After about 40 metres the fire engine reaches the end, at which point everyone bails out of the vehicle and the adults start pumping again. This time they are pumping water through two nozzles that the kids can point at the building which is supposed to be on fire. After a while a buzzer sounds and everyone rushes to get back on board the fire engine - and it's a rush back to the beginning again. The winning engine is the first one back!

Some video showing the riders putting out the pretend fire and then racing back to the beginning in their fire engines:

The look of this ride could be improved - we particularly disliked the grey metal railings surrounding it (see below photo), although these were later painted red. Having said that, Fire Academy is another example of a Legoland ride which is different from the more normal theme park attractions. It is fun working as a team trying to beat the other three engines! 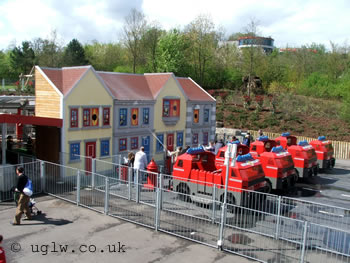 Fire Academy was added to Legoland Windsor in 2005.