This is a ride on a "boat" (firmly rooted on dry land). The attraction is designed to look like a Viking longboat. Around 20 riders climb on board and face each other. At the beginning of the ride the boat simply rocks backwards and forwards. After a while the ride also turns on its own axis as well as rocking back and forth. It then starts spinning on its axis the other way. Think of it like a roundabout which also rocks from side to side.

A video of the Destiny's Bounty in action (when called Longboat Invader):

This ride opened for the first time at the beginning of the 2008 season and was called Longboat Invader.

The queuing area for this ride seems rather small to us. 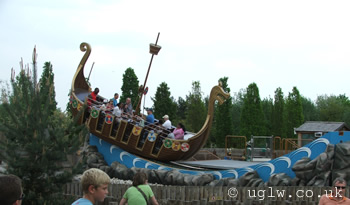